So here we are at last; Day 13 with only 18km distance and 130m ascent remaining.  I should reach Collieston by noon and, after an icecream and a paddle, be heading down to Montrose by mid-afternoon.  Well, that was the plan….

I was slightly nervous about the first few miles, as the minor roads around Aberdeen can be unpleasant walking during the rushhour, but they weren’t as bad as I’d feared and I made good progress without needing to step into the verge too often.

Once I reached the A90, I left the road and took tracks to Knockhall Castle. 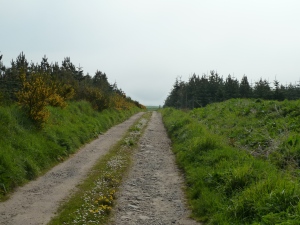 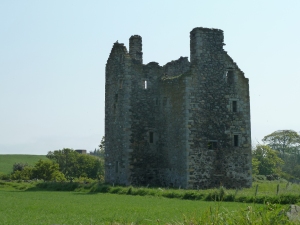 Near the castle, I was attacked by a Yorkshire Terrier which ran out of a driveway and yapped agressively at my ankles.  Usually I like dogs, but this mutt was getting on my nerves and, had it not been for the cur’s apparent owner standing nearby (and doing nothing to keep his vicious beast under control) I’d have been tempted to boot it over the top of the castle.  What I actually did was turn to face the yapper, shake my PacerPoles and growl loudly; at which point the dog turned tail and ran away whimpering.  Ha!  All yap and no bite, pathetic creature.

The day had started pleasantly cool but the hot sun had now returned and I was starting to tire when I reached the River Ythan.  I sat on a bench and pondered making this my Finish Point.  I mean, it was almost the East coast and I was within touching distance of tidal waters.  However, it seemed a bit daft to have been planning a Collieston finish for months and to give up only a couple of miles short – so I crossed the Waterside Bridge and entered the Forvie National Nature Reserve

There was an information board at the entrance to the Reserve, so I compared their map with mine and saw that none of the paths matched.  Not to worry; I would follow the main track for as long as seemed reasonable then figure it out as I went along.  Looking at my GPS track, I’m not sure I was ever on the mapped path, as I seem to have been at least 50 metres to the left of it for most of the time.  Conscious that there may be ground-nesting birds in the dunes, I hadn’t intended to deviate too far from the path, but somehow I soon ended up in the middle of nowhere and couldn’t see any paths or tracks to aim for.

The logical thing to do was to use my GPS to confirm my position then walk on a bearing to the trig point which lay nearly half way, in a straight line, between me and Collieston.  At a height of 57m, this should be easy bagging.

In fact, this turned out to be one of the hardest hours of the whole walk.  The dunes were hard work; it was like being back in the Monadliath with lots of up and down and boggy bits and rough bits, and the hot sun made every step an effort.  Whose idea was this? This was supposed to be the easy final few kilometres of my crossing and it really shouldn’t have been like this.  I found that the trig point was surrounded by short soft grass and, dropping my pack to the ground, I collapsed in a heap and had a rest.  There must’ve been an easier way to do this last bit of the walk but, now I was lying on the grass next to the trig, I did feel quite a strange sense of achievement.

Looking towards Collieston from the trig point

Once I’d recovered from the exertion, I set off again but I could now at least see a track going in the right direction, so I headed towards that.  I was pleased to find a shortcut.  I had no idea where it was a shortcut to . . . . .but I followed it anyway. 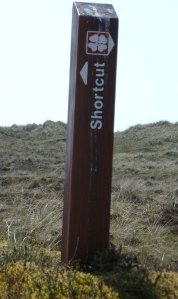 The map showed cliffs all along the coast, but I was pretty sure I’d be able to go down to the water’s edge once I reached Collieston.  I passed a lovely cove, which would have made a fine finish point, but there was no way I could have climbed down and up the steep grassy bank so I kept walking. 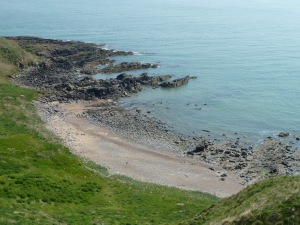 At last, Collieston harbour was in sight – and it was beautiful.  Thank goodness I’d not given up at the Ythan.

Making my way down to the beach, I passed the old Post Office.  Open for only a few hours each week, there’d be no ice-cream for me today.

I’d chosen Collieston as my finishing point purely because it contained the word “Collies” in its name.  I like Border Collies, and this seemed like as good a reason as any for choosing an endpoint.  I really could not believe my good luck at what I saw on the beach; two Border Collies being exercised.  Their owner was throwing a ball into the water for them and, over and over again, they were running into the water to fetch the ball.  I sat on a rock and watched them.  How good was this!  Had someone arranged this for me? 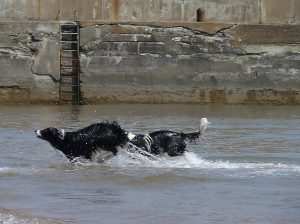 These dogs gave me the the perfect finish to my Challenge

Sitting on a rock for 20 minutes, watching the dogs, I did not notice the tide coming in and I had to paddle through the lapping water as I made my way back up the beach to the road.  This had been a beautiful finishing point and those dogs had been the icing on the cake.

This had been my 6th TGO Challenge and, apart from my first when it was all new to me, it had been my hardest – but now, standing on the sand in the sunshine, I realised that the hard times only make me appreciate the good times even more and I felt a tinge of sadness that the journey was over.