Even before I’d gone to bed, I’d decided that I’d be saving today’s hill (Ben Ledi) for another time.  This was the right choice as I found my progress was really slow on any kind of slope, whether up- or down-hill.

I followed the track round the edge of the reservoir until it became a road which was being patched by a very efficient gang of tarmac-ers. 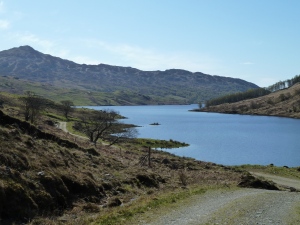 An information board suggested that I’d be able to get refreshments in Brig o’ Turk.  It was only a teacup on a map, but it looked hopeful!

The Brig o’ Turk Tea Room was wonderful.  Fresh, tasty food and a very friendly welcome.  A pot of tea and an egg mayo sandwich would probably have been enough for my lunch, but that fruit tart did look nice and there was plenty of time for another pot of tea.  After all, the walk to Callander would be easy from here.

A group of DofE youngsters arrived just after I’d ordered.  Or, rather, their supervisors arrived and ordered some grub, whilst the youngsters were left outside!  Fair enough, I suppose; you can’t have them enjoying themselves too much.

I finished my long lunch just as the DofE kids were setting off and, in the muddle, two things happened.  1. I forgot to take a photo of this wonderful tea room.  2.  I went walking off in completely the wrong direction.  This time my confusion was due to me getting mixed up over which road the tea room was actually on.  I thought I was on a minor road which was about to join a bigger road; but I was actually on the bigger road to begin with.

I’d headed East, which is usually good on the TGO Challenge, but needed to go West in order to cross the river and join the cycle track on the South side of Loch Venachar.  I soon realised that I’d gone too far East so turned back but I couldn’t find how to get to the bridge over the river.  My map showed a pub and a bridge at least 100 metres apart.  It really looked like there should be an entrance to the pub grounds and a separate way through to the bridge.  I went up and down the road looking for some sort of path or track that would take me to the bridge.  In the end I decided I would have to walk through the pub grounds and see what I could see …….. and that’s where the bridge was.

I’d wasted an hour since coming out of the tea room and was now a little bit grumpy.  The weather was getting a bit warm, so I stopped at the side of the cycle path and took off my Paramo smock.  A walker appeared and I recognised him from the tea room.  “Oh, I thought you’d have been further on than this by now”, he said.  I muttered something about a mix-up and we fell into step together. Five miles later, after discussing everything from devolution to windfarms via outdoor blogs and the ethics of accepting lifts on the TGO Challenge, we arrived at the carpark at the East end of Loch Venachar where my anonymous colleague took his leave.

Our pace had been faster than I would normally walk and I now needed a rest, so I took off my shoes and socks and spent 10 minutes watching two black labradors fetching sticks thrown into the water.

I’d booked a hotel room in Callander so, as the town came into sight, I tried to match up the landmarks with the features on my map and figure out where my hotel might be.

After checking in to the hotel, showering (and washing my clothes in the shower tray at the same time!) I wandered round Callander looking for a pub/restaurant/cafe etc that did not have Macaroni Cheese as its Vegetarian choice.  I do find it odd that the words “Vegetarian” and “Choice” are so often put together – when it really means “Macaroni Cheese – take it or leave it” – although that is a choice.  I eventually found a place serving good food and bottles of proper beer (shame about the jazz though).  I went back to my room and made some sandwiches for tomorrow from supplies I’d bought from the Co-op ….. then sat on my bed and ate half of them.  This walking malarky is hungry work.