I’ve never used any Mountain Warehouse gear and I’ve never had a softshell jacket so when they offered me the chance to review something I thought about which features would be most useful on a light, showerproof jacket and chose the Turku.  A hood, zippy pockets and adjustable cuffs/hood/hems were on my “must have” list.

I checked the size guide and found (as usual) that I was between two sizes, so I followed Mountain Warehouse’s advice and chose the smaller size.

The jacket arrived promptly and fitted through the letterbox (which saved me a trip to the sorting office).

I had few preconceptions about Mountain Warehouse clothing apart from I regarded it as being at the cheaper end of the market.  The jacket’s swing-tag says it costs £99.99 but it costs £49.99 on the Mountain Warehouse website.  The quality of the sewing and construction is very good.  I’m not familir with other types of soft-shell jacket but this one does not feel “cheap” to me.

The size seemed just right.  Maybe a little tight around my fore-arms but I can fit a base-layer, and probably a thin mid-layer, under it comfortably.  Mine weighs 555g.

At first I thought the hood didn’t fit properly, but I hadn’t noticed that the volume adjuster was already tightened.  When I loosened it off the hood fit nicely. 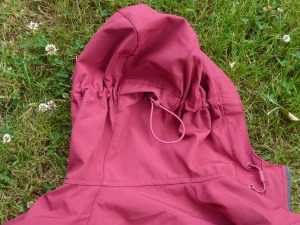 I like a hood which can be cinched in tightly around my face to keep the wind out.  This jacket has adjustable elastic on either side of the chin ….

…. but they kept slipping and I couldn’t figure out what I was doing wrong until I took the jacket off and had a closer look.

I had not noticed that you have to slide the elastic into a slit in the little plastic sleeve and that keeps it in place.

The pockets seem a good practical size and are all zipped.   The handwarmer pockets are big enough for thin gloves, hanky, car keys.  The zipped chest pocket is fine for my phone or wallet.  The pocket on the left-hand arm would hold my compass or GPS; or sweets, money etc

I was pleased to find that the space behind the handwarmer pockets, inside the jacket, is the right size to hold an OS map.  It may not be comfortable to walk far with these “extra” pockets full but I think they’ll come in handy.

One feature that I may not like: the cuffs have Velcro adjusters on them. They are made of a hard plastic and I can see myself scratching my face when wiping my nose in the cold!

I took the Turku on my recent hottest-day-of-the-year three day trip to Cadair Idris.  As I’ve been wearing Paramo as my single-layer wind- and rain-proof outer layer for several years, I had to consider what I could wear over the top of the Turku if the rain started to lash down.  (The Turku is described as Showerproof).  I took my old Lowe Alpine Triple Point Ceramic jacket as a light waterproof to wear over the top – or on its own – if necessary.

Due to the hot dry weather, I had no reason to wear the jacket during the day but I put it on in the evening while we were standing around watching the sun set.  It kept the wind out adequately but, as the evening got cooler, I needed to put on my thin fleece jumper underneath to keep my arms warm.

As loyal readers may already know we had to pack up and move in the early morning – so I put on the Turku to keep warm.  I shoved my Buff and fleecy headband in the two internal pockets.  I didn’t need to wear either of them but I now know that I can comfortably carry my gloves, scarf and earwarmer in the jacket pockets.

Once out of the wind, and as the weather got warmer, I would have liked to roll up the sleeves.  I do this all the time with my Paramo smock and I’ve got used to the versatility.  All I could do on the Turku is turn the cuffs back an inch or two.  It made a bit of difference but not much.  I do find the fit a bit too tight around the fore-arms, although that’s possibly just a personal preference.

At times I also missed the side vents of the Paramo but it would probably be daft to have vents in this sort of jacket.  If it gets hot (like it did do) you’d take the jaket off.

By 8 o’clock-ish we’d all stripped off our outer layers and were back in shorts and T-shirts so I didn’t get to wear the jacket again until the evening when walking back from the pub.  That’s probably how I’m going to use this jacket most often at this time of year as the weather is not usually cold enough to need an outer layer but I’d want to have a proper waterproof with me if I was heading into the hills.

I’ve worn it a couple of times since then in light rain.  Not for long enough for it to get soaked through but I felt confident that it would keep me dry for short trips.

How do I think I’ll use this jacket?

During the summer I’ll probably wear the jacket for dog-walks, and trips to the pub or shops.  I know that it is sufficiently waterproof to cope with the odd shower but I wouldn’t want to rely on it if the Heavens opened.

Later in the year I’ll probably wear it for Autumn walks on a dry day but will be back into my Paramo in the winter when the faff of swapping jackets to cope with dry/cold/wet/windy weather combinations is too much.

I’ve appreciated having the opportunity to try out this jacket.  It’s well made and comfortable and has given me a good impression of Mountain Warehouse clothing.  I will definitely wear it again – although it’s made me realise that I’ve now got very used to the Paramo concept of a single layer that does everything.

Disclosure: I was given this jacket free-of-charge by Mountain Warehouse. 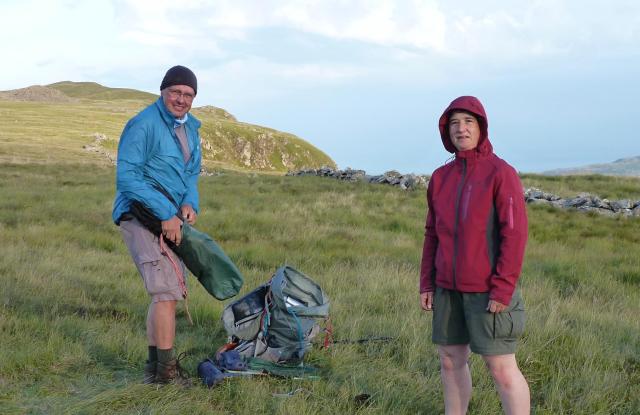 Like Loading...
This entry was posted in Gear, Walking and tagged jacket, Mountain Warehouse, review, turku. Bookmark the permalink.